Microsoft Soccer is definitely one of the worst soccer games ever made - and one of the many first embarrassments for Microsoft when it tried to re-enter the gaming industry in mid 1990s. Games Domain trashed this game quite thoroughly as follows:

"The game installs easily enough, providing you are careful about DirectX. The front-end looks quite pretty, even if parts of the tournament setup are counter-intuitive. There are three basic options, friendly, tournament (of which there is only a fixed format, with a choice of Global or Continental) and multiplayer using all the usual DirectPlay methods, modem, serial, IPX or TCP/IP. Only national teams are offered, along with a team editor which would enable you, should you have the motive and the patience, to adjust the players to represent their real-life counterparts in appearance and name. By default, the England team, for example, has a strange mix of fictitous players who draw their surnames from English history amongst other sources. The usual parameters are adjustable, match length, rules, etc.

The in-game controls are relatively simple to pick up but this is where the game starts to fall apart, it appears impossible to control a ball that is not moving slowly along the ground. Any ball that is bouncing or travelling at more than a walking pace will pass through your player. This makes playing passes through the air very difficult. The heading is limited to vertical jumps to make contact with the ball, ie no diving headers and the ball is only ever headed a short distance. Overhead (bicycle) kicks are possible, indeed at one point I scored a goal with one and tend to be of more use than the headers, leading to players somersaulting in the air all over the pitch - a very strange sight. The gameplay in general is limited, due to the problems of passing through the air mentioned earlier, coupled with the exaggerated ball physics which leads to the ball going out of play far too often. Mostly the ball is passed around a little, then a fast player charges past the last line of the badly organised CPU defence and either squares a pass for the centre forward or has a shot. I haven't actually seen many incidents of offside due to the way in which I played but a fellow reviewer mentioned that the offside rule is flawed, which wouldn't surprise me. CPU players are often seen to turn back and forth on the spot as if confused, but at high speed and for 3 or 4 seconds at a time.

Oh dear, Microsoft, this is quite frankly, junk, and with that in mind, one of our less prestigious awards should be making itself at home somewhere on this page. Avoid this game at all costs, if you want a football game with low system requirements go for one of the Sensible Soccer series or even the original FIFA Soccer. Just whatever you do, don't buy this, if you still don't believe me, check out the demo and if you still want to buy it, don't say I didn't warn you, 23 UK pounds is a lot to pay for a shiny drinks coaster."

One interesting anecdote to this game: the game was developed by Lobotomy Software, but the credits mentioned "based on the works of Dino Dini" - whom fans will recognize as the celebrated designer of Kick Off series. Given how bad the game is, it seems more likely that Microsoft Soccer was 'inspired' by his games without Dini having an active involvement. 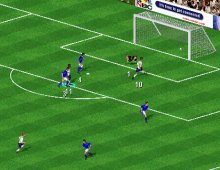