Michael Jordan in Flight is a neat basketball game, one of the first to use digitized video footage of players, although the results are not very effective. It was also one of the first games published under Electronic Arts' EA Sports label and a nice set-up to EA's later NBA games series.

Despite starring basketball legend himself as well as a good 3D-bitmap-mix graphics engine with SVGA support (sadly just for a few older video cards), the game simply isn't that fun to play, and replay value is minimal. It offers 3-on-3 matches and tournaments and only supports mouse and joystick controls - no keyboard. Aside from Jordan himself, other players look very much alike, and the controls are not user-friendly. The best features of the game are probably multiple camera angles and the ability to create your own highlight films with "Video-Edit Lab" feature.

Other than the novelty and star power, the game has very little else to offer. Fun for a while if you're a Jordan fan or want to see how (awful) digitized video would look in a basketball game. If you really want to play a good basketball game, better stick to EA's earlier classics One on One or Lakers vs. Celtics. 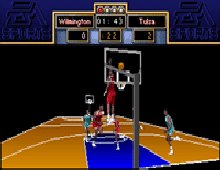 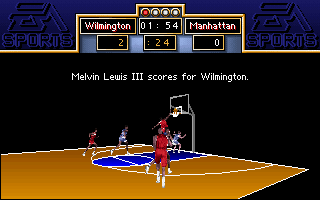 People who downloaded this game have also downloaded:
One on One (Jordan vs. Bird), Lakers vs Celtics, Hardball V Enhanced (a.k.a. Hardball 5 Enhanced), Magic Johnson's Basketball, Lamborghini: American Challenge (a.k.a. Crazy Cars 3)