This is one great game. Maybe even the best basketball game until the first NBA Live! title came out back in 1995. And, fortunately, it is very hard. Usual goal is in front of You - pick a team and beat the others during the championship and later in play-off. This game was actually the true predecessor of modern NBA Live! games and has some nice graphics and animated dunking (with the slow motion, heh). I really love it.

A nice Basketball-Sim, not a smash-hit but really playable. You aren't only able play the L.A. Lakers or the Boston Celtics like the name of the game implies - you can choose from more than that as you can play the entire Playoffs. The controls aren't bad, but somehow the game wasn't able to hook me. A nice choice for basketball-fans anyway. 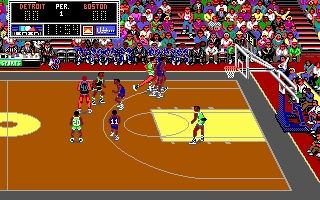