Oldie basketball game based on the televised "one-on-one" basketball exhibitions of the 60's, featuring Julius Irving and Larry Bird. One of EA's first games, the C64 version was one of the biggest hits in the early days of the classic home computer, although the PC version wasn't that successful. William Hunter's capsule review for MobyGames says it all about what makes this a classic:

"One on One was a seminal sports game, one no self-respecting owner of one of the early PCs would have ignored. Its large, detailed sprites representing the players were nothing short of revolutionary at the time, along with a variety of different shot types triggered by the distance and angle the player was to the basket. You must also keep an eye on the energy level of each player, in order not to overexert them and end up too exhausted to play effectively. The audio portion of the game was also a standout, from the various sound effects on court to the impressive theme song (sounded better on the SID chip on the 64 than the tinny PC speaker). The smashing of the backboard was another irresistable detail to the game. There were also quite a few different play options available to lend variety to the game.

The Bad:
The AI was pretty simplistic, and even at Pro level it didn't take long to work out a pattern where you could consistently shut out the competition.

The Bottom Line:
This is a classic piece of early computer gaming, just another EA product that raised the bar of quality about 20 meters." A must-have for all basketball fans. Be sure to also check out the 1988 remake version, also on this site. 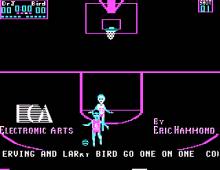 One on One (Irving vs. Bird) screenshot

People who downloaded this game have also downloaded:
One on One (Jordan vs. Bird), Lakers vs Celtics