Magic Johnson's Basketball is a decent arcade-style basketball game starring LA Lakers' superstar Magic Johnson, one of the most famous players of all time. It is a direct translation of the popular coin-op arcade game called Magic Johnson's Fastbreak Basketball. Like the arcade original, the game is easy enough for beginners to learn, and challenging enough for experts. You can play against the computer or another human opponent in a hot-seat mode. 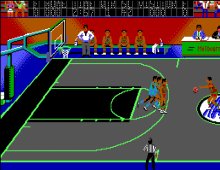 People who downloaded this game have also downloaded:
Michael Jordan in Flight, One on One (Jordan vs. Bird), Hardball IV, Lakers vs Celtics, TV Sports: Basketball