Jammit is a very entertaining arcade-style basketball game that almost perfectly captures the flavor and atmosphere of "street" basketball that is very popular in the US. In contrast to normal team basketball, street basketball is one-on-one, with no complex rules to keep track of, and hardly any referee. This means that jostling, pushing, and tripping your opponent on your way to the basket is perfectly legitimate, and Jammit does a a great job of translating that no-holds-barred, knuckle-blistering action onto the computer screen.

The main objective of the one-player game is to win a tournament that has been set up with the best street ball players around. There are 3 main players you can choose from, each with his or her own style of playing, including different strengths and weaknesses. After you choose your character, you go through eight rounds of play, first starting with a normal one-on-one action. There are six other games that are variants of this basic mode, including sweat, 2 shot, poison, slams only, in 2 it, frenzy, and cutthroat. The goal in every game is the same: be the first player to score 21 points. In sweat, there are no fouls, and it is winners out. In two hot, there are moving X's that float around the court-- if you score a basket from an X spot, your score will be doubled. The most interesting variant is cutthroat, a three-player game in which two of the players are on defense. If you manage to score a basket, you get three free throws . If you score 20 or 13 points, then you get 10 deducted from your score. The trick is then to score exactly 21 to win the round. If you manage to complete all 8 rounds, then you will go against the defending champion "The Judge." You will play at his court-- with HIS rules.

There are many other interesting features that set Jammit further apart from other basketball titles. For example, each player starts off each round with $300 dollars to bet with. You advance to the next round when you have completely bankrupt the computer opponent. One other great feature is the SLAM CAM. When a player drives to the rim and gets close enough, the game will zoom into the close-up SLAM CAM view were you can show off your dunks (or blocks). The players are digitized and animated well, although they still look no more 3-dimensional than the notorious 2D "paper doll cutouts" of Betrayal at Krondor. Excellent sound effects, including a lot of "trash talk" from the players (which you can toggle on or off) round off this fun action basketball game that all action fans, and fans of Epyx' classic Street Sports Basketball in particular, will enjoy. 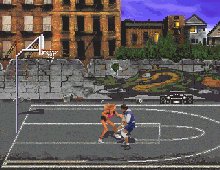 People who downloaded this game have also downloaded:
Amazon Trail, The, Hole-In-One Miniature Golf, Super Sumo Wrestling 2002, Super Dodgeball, In Search of The Most Amazing Thing