One of many football (soccer) games that were being made during the late 1980's and early 1990's, but this one is definitely one of the worst. Why? Heck, why not! The graphics are bad, the sound is bad, the controls are bad...

Anyway, it is 1990 and the World Cup is under way. Pick your country and try to win the cup. Before each game you get to select the formation and all the players for the match. After that you're ready to go. Just try to score more than your opponent and you're ok. As I said, controls are VERY hard and the worst thing about the game might be the control of the goalkeeper. You will get nervous about this one quite fast.

Surely not the best soccer-game ever made. But I just tested it and after getting used to the controls (you can define them yourself, but you cannot use the arrow-keys) I really enjoyed it. I don't think I'll have to tell you what soccer is about? But then again, there are quite some people from the USA visiting this site ;-) O.K. then, you got to place the ball INTO the goal (kicking it over it is no good!)... Replay the world-championship of 1990 - let's see if Germany will win again or if you lead YOUR country (whichever it may be) to triumph. The game's not too difficult if you choose Italy or Germany, the players of the good teams (of that time) are faster than the players of weaker teams (e.g. Costa Rica). Solid game - overall good for some matches, even got two-player-mode. 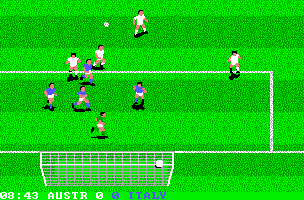 People who downloaded this game have also downloaded:
Kick Off 2, Sensible Soccer, Kick Off 3: European Challenge, Sensible World of Soccer 96_97, Lakers vs Celtics