It's a Funny Old Game

It's a Funny Old Game is one of the few tongue-in-cheek soccer simulations in existence. While it will never dethrone the likes of Championship Manager or even On The Ball as one of the most accurate simulations of soccer management, IaFOG can lay claim to be one of the most light-hearted, and thereby striking out its unique territory. There are many amusing bits in the game, especially cartoon drawings that are used to depict players, and animated soccer ball that bounces on the pitch to signify each team's advances in the match. The game itself is a passable simulation, replete with options that become standard in this type of game, including player drafting, training schedule, sponsor and finances, and formation selections. Each player is rated in several categories, and fatigue plays a big role in the matches' outcome.

Purists will likely get annoyed at the game's inaccuracies and unrealistic logistics (drafting and trading player, for instance, are relatively useless, as it's much more cost-effective to just train your players to improve their performance). The game's longevity is also questionable, because your career as manager ends all too soon, with few tournaments or championships to lead your team through. Still, for those who are new to soccer and are wondering what the fuss is all about, and die-hard managers who want a relaxing break from tougher sims, It's a Funny Old Game is a decent introduction that should provide some leisurely-paced entertainment for a while… albeit a very short while. 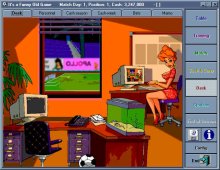 It's a Funny Old Game screenshot