Hover is an excellent freeware hover racing game that features excellent 3D terrain, fluid animaiton and physics, although unfortunately it only has one track since the promised "full release version" never came out. In Hover, you pilot futuristic hovercrafts over a challenging desert racecourse. Despite the fact that Hover cars are a tad too small for my taste, top-notch graphics and gameplay (especially the unmistakable thrill of hovering from one steep canyon to the next) makes for an exciting and quite unique racing experience. Hover is probably unlike any other racing game you have ever played, and you will enjoy it while it lasts... until you have mastered the one track in the game and hope for more. As it stands, it's still a great coffee-break racing game that you won't mind playing again and again. 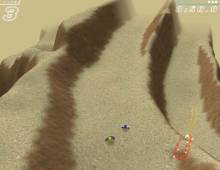