One of the best racing games ever made, Ignition is a wonderfully addictive game that strikes a perfect balance between awesome visuals and solid gameplay. The description of the game on the official site says it all about what you can expect from this game:

?You're about to enter a world of no-holds-barred auto racing - life in the really fast lane. Across exotic countries and around some of the most punishing race tracks ever devised you'll have to conquer a variety of other vehicles in a nitrous sprint for the finishing line.

But if you think that racing lines, pit stops and aerodynamic car design is the way to win one of these races, then you're in for a serious surprise. Out on these race tracks you must use all means at your disposal to win - if that means ramming someone off a 200ft cliff then so be it - they shouldn't have got in your way. The brave survive and the weak well, they end up as jam on the Tarmac. Which is kind of poetic if you think about it.

How you approach each of the races in Ignition is entirely up to you, but remember - if you decide to play fair you're sure to get nudged into the nearest river. Learn the tracks, pick your vehicle wisely and drive in the most devious manner you can and you might, just might, win.?

Sounds ambitious, right? For once, the hype is real: Ignition features extremely well-designed tracks that never lose their appeal. You will jump out from waterfalls, across chasms, or over huge steeps, select your route at forks in the roads, race along the railway and airport runway?all this, while watching out for tumbling boulders, tornados, and other calamities. There are eleven exotic vehicles for you to choose from, including a police car, school bus, or even monster truck. Single, two-player splitscreen, and multiplayer options are available for four different race modes: championship, single race, training and pursue mode. While not cutting-edge, the game?s graphics are top-notch. Transparent skidmarks, smoke, sparks, weather effects like snow and rain, and amazing water effects are some of the best ever in a racing game. In contrast to most power-hungry 3D games nowadays, Ignition is optimized to look great and run smoothly on Pentiums without 3D cards. Keyboard, joystick, and steering wheel are supported, with very intuitive controls that take only a few minutes to learn.

With super-fast 3D engine, excellent graphics, and some of the best tracks ever designed, Ignition will keep racing fans occupied for hours on end. 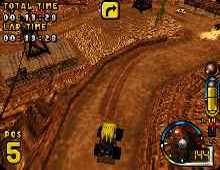