Hat Trick is a poor port of the classic Atari 7800 hockey game, mainly due to poor response of IBM joystick that is far inferior to its Atari counterpart. Since all the attraction of the original game is fluid joystick control that allows fast and fun action, this game is basically pointless without good controls. 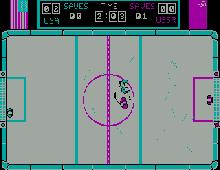