Game, Net & Match! is the long-awaited third game in Blue Byte's excellent Great Courts tennis game series. Unfortunately, GNM is not as good as its predecessors: despite SVGA graphics and more gameplay options, the game is so easy that even novice tennis players will find no challenge whatsoever after the first few games.

The game starts out promising enough, with the option to practice, play a single match, play a full season, or compete in a tournament. You can create your own player by distributing a limited number of points in 5 categories: volley, speed, strength, forehand, backhand, and service. As in RPG games, these skills increase as you gather experience on the tour. Your custom player is not available in singles or doubles matches, though: you have to choose from a list of six male and six female pros instead.

So far, so good. The gameplay is very easy to learn, especially if you have a 6 or 8-button gamepad. You can perform a wide variety of shots, including lobs, ground strokes, topspin shots, slices, drop shots, and serves. But you'll need a lot of practice to be proficient at all of them - especially the serve (due to a very finicky cursor that requires a delicate touch). You'll likely find the first few computer players challenging. They are extremely fast - but then again, so are you. After you get the hang of all the shots, GNM becomes incredibly easy since shots are never out of reach in this game, and all computer players seem to have exactly the same style. Although the game boasts good AI, the reality is that computer players are quite dumb. They never seem to know how to handle at-net volleys, stupidly insisting on giving me straight shots/volleys every time I'm at the net, instead of lobbing the ball over my head.

The graphics are decent, although it doesn't take full advantage of 3D cards. Players' movements are stiffer than the smooth animation of much older 4D Sports Tennis, which is a shame for a 1998 game. One of the brighter spots in the fact that Blue Byte offered a 24/7 dedicated server to provide registered users the chance to play against on-line opponents, although unfortunately this service has been abandoned (as with the game). Overall, GNM is worth a look if you just want to play one match once in a while, or if you prefer a very easy tennis game you can beat in season/tournament play relatively quickly. Otherwise, Blue Byte's previous Great Courts games are far better choices. 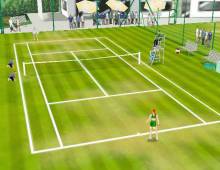