One of the best freeware action games ever made, G-Sector is a sharp-looking, knuckle-blistering, action-filled futuristic sports game that plays like a cross between rollerblading and gladiator combat.

The objective of the game is to zip around the futuristic metropolis in your speedy hoverboard, performing stunts and defeating other riders before time runs out. Succeed, and you get to play in a new, more challenging arena with more opponents and outstanding visuals. The game roughly alternates between cities and arenas, each with its own backgrounds and layout so the action never gets boring. You can alternate between a first and third-person perspective at any time, although I find a third-person view much easier to gauge distances.

Graphically, G-Sector is top-notch—the "Genesis" 3D engine produces excellent visuals that could give commercial games like Trickstyle a run for its money. The learning curve is somewhat steep, as you must learn dual keyboard/mouse controls which you can customize to suit your preferences. The hardest part of the game lies in controlling your hoverboard. Because the hoverboard is not powered by an engine, you must constantly build velocity by flying off ramps and performing various tricks to gain speed. Since gameplay is essentially a deathmatch, your enemies' shots can come from any direction, and it takes a while to find the offenders. You are protected by an invisible electronic shield, but it can be damaged and eventually broken with enough shots. You can collect shield power-ups as well as other items on each level, but they are few and far between.

Overall, G-Sector is an entertaining deathmatch game that boasts very high production values for its price (zero). Definitely well worth a look for anyone looking for a deathmatch game with a difference. It's unfortunate that Freeform Interactive as well as its parent site Ingava.com is no more-- G-Sector and its brethren Outbound belong to the first new-generation freeware gems that rival commercial titles. 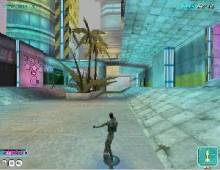