Freeride Earth is an excellent, albeit very limited, 3D snowboarding game from a French outfit GraphitX, who is looking for publisher for their games. First released in 1999, the current version (3.0) is a marked improvement over the first two with many new features in addition to better DirectX graphics.

Gameplay is fast, fun, and very simple to learn: with a snowboarder, you race for points against a clock, and you can increase time left by collecting bonus rings. That's about it, but the relatively large gameworld and randomized map (you get a new one every time you play) helps increase the longevity. The game is also not without challenge: you have to be careful not to hit into trees, boulders, and other obstacles, and the challenge to beat your previous best times is an appealing one. With pleasant 3D graphics, an easy interface, and relaxing gameplay, Freeride Earth is a great time-waster that is perfect for those short coffee breaks. 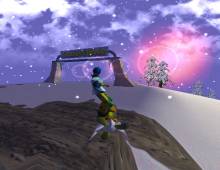