Fortunately, the idiom ?the third time is the charm? holds to this game. The game retains the excellent military, economic, and diplomatic models of the first two games, with a significant improvement in user interface (although it remains far from user-friendly) and graphics. The range of scenarios and options is probably the best ever seen in games about the Civil War, although the lack of tactical module is slightly disappointing. Interactive Magic, the original publisher, also added a lot of multimedia elements (pictures, etc.) to fill up the CD-ROM space, and these are quite nice although they don?t add much to the gameplay. Overall, if you are a history buff with even a passing interest in the subject, this is a must-have. Veteran wargamers who prefer the tactical scope (e.g. Norm Koger?s or Gary Grigsby?s games) may want to try SSG?s Decisive Battles in American Civil War series and SSI?s Civil War games instead for their tactical fix. Shame about the cumbersome user interface, though. 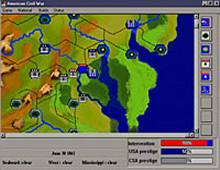