Football Masters 98 is a bad but very detailed soccer management simulation that is one of the disappointing 'missed opportunities.' Games Domain says it all very critically in their review:

"Football Masters 98 is easily categorized as a labor of love. A far descendant of the 1990 Football Crazy, it was evidently programmed by people who love to fantasize about football and football management. The fact that it is so rich and deep isn't a surprise; however, the fact that it is also totally unplayable is.

"Most every possible football manager feature is present in this title - fully accurate domestic and European cups (and also team kits), friendly matches (including invitations by computer controlled teams, a welcome addition), stadium improvements, financial management up to player bonuses, insurance and even holidays, sponsorship deals, training, contract negotiations, a detailed transfer market with scouts, youth teams, a fully customizable assistant, and a host of others. What's especially lovely about FM98 is how detailed some of these options can be. Your scout can look for players using any ability or trait you can think of, including, for example, their height. Stadium details include pitch size, which may have an effect on some tactics. The tactics screen is simply wonderful in its intricate simplicity (as funny as it sounds), based on choosing two out of five possible tactical fields for each of Defense, Midfield, and Offence (such as Zonal and Offside for Defense, thus not choosing Sweeper, Man-to-Man Marking or Attacking Fullbacks). You also have four "pre-set tactics" columns that you may fill in advance and use when needed. A player, apart from being rated on a 1-10 scale in 7 basic skills, may be a Righty, Lefty, or good with both feet, and may also be, say, composed yet courageous, or maybe wonderful coming out of the bench. Finances allow you to set ticket prices, reflect real life occurrences such as interest changes on loans, and show you how fragile your position is when a new chairman comes into the board. Football Masters 98 truly does excel when it comes to detail. Say you want, for example, to view the full, real life history of matches played between any two teams. Piece of cake. You may be interested in a full, historically accurate account of any team's progress since 1871 (!), including but not limited to top goal scorers, best scores, and performance in various cups and leagues.

With such an appetizing opening, one would expect me to go on writing a nothing less than glowing review. And yet, this is not going to happen. This review is going to end very prematurely. In fact, I thought long and hard before allowing FM98 to escape our Trash Bear's wrath. The reason is also why this review is so short: FM98 is, for all intents and purposes, unplayable. This game's match interface is bloody horrible. No numbers - at all - nowhere. What you get on the match screen are the squads at the sides, a static pitch view in the center showing the formations, and a score summary at the bottom. The only moving parts are the ball and performance bars. The former simply hops from here to there on the pitch view, moving, or rather jumping, between about 12 alternate positions, supposedly helping you (again from ESP's website) "indicate the location of important action during a match". At best, it helps in developing a headache, at least on a big monitor.

Considering the other moving part of the match view screen, each player has a graphical performance bar, which changes during the match. Again, no numbers, just a constantly moving colored bar (and remember, there are 22 of those to look after). The player's name that is in possession of the ball is highlighted at any given time. These three visual feedbacks are the sole way for you to measure your team's performance. Even textual descriptions are absent - you only get them when something remarkable occurs, like a goal is scored, someone gets a card or maybe injured.The whole idea is ridiculous. I found it impossible to manage my team during a game. With so little feedback, coaching is a matter of guesswork as it is of analysis. I could make no serious judgement about the performance of my team, or even any particular player, because those damned performance bars are so generic and therefore uninformative. In a game that relies so heavily on your "seeing" the match, one simply must develop a much more detailed match view. After trying to play the game for about half a season, I found myself not caring one bit about what happens during a match." The bottom line: avoid this average game and stick to Ultimate Soccer Manager or other classics. 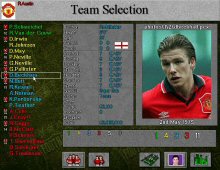