Fight of The Sumo-Hoppers, The

Perhaps the world's only sumo computer game, The Fight of the Sumo-Hoppers is an original and strangely appealing fighting game where you try to to beat your opponent in the sumo tradition: force him outside the tatami mat, or make him touch the ground with a part of his body other than his foot.

Gameplay is surprisingly complex given how easy it is to learn how to play. The wrestlers hold each other automatically. You control your wrestler by moving his foot in 8 basic ways (adjusting length and angle). By combining different positions, you can achive complex series of movements. Your opponent has competent AI, and the matches often evolve into a mesmerizing series of moves and countermoves-- just like in real sumo. The game is perfect for anyone who appreciates ASCII-only games, or games where gameplay shines through simple graphics. Because the game is so unassuming in its elegant simplicity, it may take a while before you realize how deep -- and realistic-- the game really is. 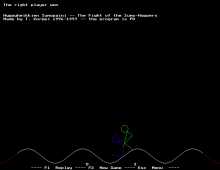 Fight of The Sumo-Hoppers, The screenshot