One of the longest-running game shows in existence today, Jeopardy! has attracted millions of faithful fans worldwide. The show's charismatic host Alex Trebek becomes one of the -- if not THE -- most recognizable TV show hosts of all time. It is therefore not surprising that there has been numerous computer versions of this popular game.

For anyone who's never seen the TV show before, here's a super-brief version of rules. Jeopardy! is basically a trivia quiz, in which three contestants compete to win the most money, earned by giving the correct answers. The twist is that the contestant's answer must be phrased as a question. For example, the question (called "clue" in the show) may be: "he was the first man on the moon," to which the correct answer is "who is Neil Armstrong?" Questions in the first round (chosen from 6 categories) are worth $100 to $500 each, while those in the second round are worth twice as much. In the final round, only a single category is available. The contestants will make a wager in secret, after which they have 30 seconds to write the question when the clue is revealed. The person with the most money after the final round wins the game.

Softie, which later became GameTek, was one of the first companies to license the show-- and used it quite effectively. Between 1987 and 1991, Softie/GameTek released no less than 6 Jeopardy! PC games, each better than the last. The first four versions, i.e. from 1987 to 1990, sport identical CGA-only graphics and same contestant faces. Each game has hundreds of questions, including fun features such as the Daily Double (in which the contestant who picks that clue is the only one with a chance to respond, using a wager similar to the final round). The company even produced computer versions of different Jeopardy! variants that were mushrooming at the time. For example, Jeopardy! Junior Edition, released in 1989, is similar to the first four editions, except that the questions are designed for 7-12 year-olds, with an appropriate set of contestant graphics. Super Jeopardy! in 1991 was based on the short-lived version of the show, Super Jeopardy!, in which dollar values were replaced by points, and it was a "grandmaster tournament" of sorts whereby top players from the show compete in a 13-week marathon to determine the champion of champions. The game sports VGA graphics and very difficult questions, similar to the show.

Because Softie/GameTek practically monopolized the license until Hasbro gained it in late 1990s, it is difficult to say whether these PC games are as good as they can get. I would say that they all stand up well with time, as the questions are all originals from the show itself, and the series progresses quite nicely from CGA to VGA, Windows and beyond. Features such as Audio Daily Doubles and Video Daily Doubles were gradually added as the technology becomes available (e.g. sound cards), so fans of the TV originals have much to like. While the early CGA versions don't stand up well with time due to blocky graphics and grating PC speaker sounds, VGA releases such as Super Jeopardy! remain a lot of fun to play even to this day. 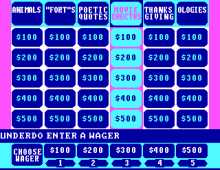