A hilarious, tongue-in-cheek olympics game like you've never seen it before, Caveman Ugh-Lympics depicts what olympics may have been like in the prehistoric times. Choose an athlete among 6 choices, each with different expertise, to compete in saber race, mate toss, clubbing, firemaking, dino race and dino vault. The events, especially dino vault and firemaking, are very original and fun to watch, despite some awkward controls. 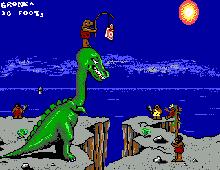