F-Zero is a great remake of the classic Super Nintendo game of the same name by Nintendo. The game looks and plays remarkably similar to the original game, down to the details of each track and the way each car handles. As in the original game of futuristic racing, F-Zero lets you race 4 tracks against 15 computer-controlled racers. The game is full of power-ups scattered on the tracks, but the best part is using special track features such as energy pads, turbo pads, and jump pads. A well-timed use of these helpful tiles can spell the difference between winning and losing. If you enjoyed Nintendo's classic, you will be pleasantly surprised at how faithful this fanmake remake is. If you are a racing fan but have never played the original, you'll find F-Zero a great game that will give you a glimpse of Nintendo's prowess as a game developer - all without the need to find the game ROM or an emulator to run it. Recommended! 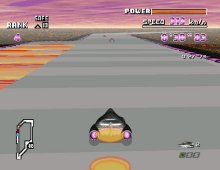