Extreme Warfare Revenge is an outstanding 'wrestling promoter sim' from Adam Ryland. This is not yet another arcade wrestling game where you watch guys in skimpy clothes duke it out on the stage: this is a realistic, detailed simulation of the wrestling business. As a budding promoter who just got started in the real-life world of wrestling where TV rating matters more than having good-looking guys in your staple, your job is to take your federation to the top of the wrestling world and keep it there. How good is the game? Well, suffice it to say that this is the very first wrestling game I enjoy, and not since playing Title Fight Pro Boxing back in 1994 have I enjoyed a "sport promotion" game this much. But as I am far from being a wrestling expert, let's have the gurus at Talk Wrestling Online convince you of how much fun it is:

"Because of the "Spreadsheet" type layout to the game, EWR?s graphics are not it?s big selling point. The layout of the menus takes the format of a red, white and blue colour scheme, which never causes any problems due to the fact that text clearly stands out from the background. The loading screens are filled with scantily clad women, wearing outfits so revealing they would make Kelly Brook faint. Apart from that though, there are no pictures to be found in the game due to copyright issues.

The game is great fun to play. You have complete control in EWR, and it's down to you who to push, who to sign, and who to fire. You have to try to take your federation to the top of the wrestling world (or keep them there, depending on what promotion you chose to run). To do this, you have to keep an eye on your finances and TV ratings. If you go out and hire the biggest names in pro wrestling for your federation straight away, you'll be lucky to last a month, due to the wages you have to pay. Instead, you have to start off with wrestlers you can afford, and build them into the new Hulk Hogans or Rocks. However, people won't tune into your TV show to see no name wrestlers- they want to see superstars, not rookies. If your federation is a success, you can choose to run monthly PPVs for extra income. However, the road to victory is not always smooth. Real life situations can hinder your progress. Wrestlers can show up late, turn to drink and drugs, refuse to do the 'job' to another wrestler they don't consider in their league. You have to manage your roster with care, or you might find yourself in a situation with an angry pool of talent, reluctant to go out and fight for the fans. Hiring staff to keep your wrestlers in order and do other tasks (E.g.- Medics, production workers, storyline writers) might help your federation, but they won't work for free.

You can do just about everything wrestling related in this game. TV networks and sponsors will offer you deals, but if your promotion is seen at "extreme" or risky, your sponsors won't hesitate to pull out of the deal. You can donate money to charity to raise your public image. You can choose which belts to use in your federation, and add/delete championships as you see fit. Nearly everything is editable. Picking your commentators for each show may seem a simple task, but you have to think carefully. If you were a wrestling fan, would you watch a show if the commentators were awful? No, that's why Kevin Kelly's Metal does so poor every week. You can even choose what format you want your show report in- Do you pick the brief report of the Scotsman, the cynical approach of Scott Keith, the in-depth "Steve in the 5th row was wearing a blue T shirt" style of CRZ? It?s down to you, like the one thousand and one other options in EWR.

The game might be addictive, but it's not one hundred percent perfect. There is a lack of handicap matches and special referee matches. Sometimes a worker will refuse to work with another wrestler, even although they are above them on the card. If you don't have a show every week, you'll just find yourself pressing the Next Day button over and over. And conversely, if you have too many shows, it might get a bit repetitive just booking events non- stop. Aside from these minor faults, EWR is a superb game. It's 100% legal to download it for free, so there's nothing to stop you from giving this game a go. And believe me, it's worth it just for The Coach's Dance Of The Day!"

Suffice it to say that if all sport management games were as good as this underrated wrestling promoter sim, sports fans will never have a reason to complain again. Highly recommended. 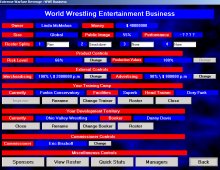