Eurosoccer is a subpar football game from Flair. The game lets you manage one of Europe's best clubs in either friendly match or a tournament mode. A comprehensive list of teams and players aside, there is really not much to distinguish this game from the likes of Manchester United.

One positive aspect of the game - and one that is not common in 80's football titles - is good animation of players on the field. Players are much bigger than average, making it easy to tell what they are doing. But as Sensible Soccer proves, realistic player animation cannot supercede ease of control and gameplay varieties, and in this regard Eurosoccer falls far short of the mark. Try as I might, I could not pull off a curved ball at all in the game, and even volleying the ball is very hard to execute with the cumbersome interface and imprecise controls - good luck pulling off fancy shots like the bicycle kick. One to avoid. 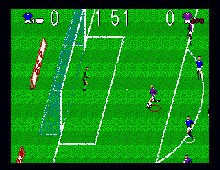