European Superleague is an obscure and underrated soccer management game (SMG for short) from German developer CDS, released only in Europe. You can manage one of eight European teams on one of three difficulty levels. Similar to other SMGs, you have all the usual management options: training, scouting, transfers, and team strategy. One very nice thing about European Superleague is an excellent range of in-game match tactics you can use. But unfortunately for a commercial game, the quality of graphics is mixed: ranging from the amateurish look of your office, to the great-looking cartoons that depict your team's actions during the matches (the cartoon that represents when they score a goal is especially funny). There are numerous nice touches throughout the game, such as the ability to choose what to say to the press when your phone rings.

The game interface is also well-designed: you will be reminded on what to do next by a secretary, and the options that you have no access to (usually because you have to do something else first) will be greyed out. All in all, European Superleague may not be one of the best SMGs ever made, but it certainly belongs in the top 25% of sport management games - and certainly deserves much more attention than it received. Recommended. 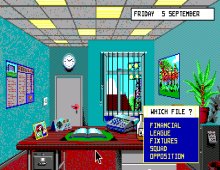