European Champions is a fairly mediocre soccer game developed by Audiogenic covering most of Europe's top leagues. The game features two display modes, which can be changed during gameplay: An overhead view, similar to the one found in Kick Off. And a side view, as seen in most soccer arcade games. Technically pretty poor for 1994 and both in terms of gameplay and fun miles away from classics like Sensible Soccer or the early Kick Off games. 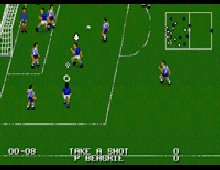