One of the most little-known games published by Sierra, Eat My Dust by Funnybone Interactive is a decent racing game for kids that in many ways merits its obscurity. Games Domain says it all in the review back in 1997:

"Eat My Dust is very much in the vein of Mario Kart, with the basic aim of the game being to reach various checkpoints in the allocated time, whilst finishing the race in the highest position and fastest time possible. Although this seems pretty straight forward, each of the tracks contain various roadside obsticles, and you have a number of computer controlled opponents who are intent on preventing you passing them. Every car on the track has a number of strange Mario Kart type weapons (such as chickens, swarms of bees and golf balls), which upon impact affect the vehicles in different ways. A limited supply of ammunition is initially available, with a large number of ammo refils randomly scattered accross each course for collection. Controlling the various vehicles throughout each course is very easy to get to grips with, due to decent handling. Players will also get to choose between five different styles of transport, which range from a sporty buggy to the huge groundbreaker. Each of the vehicles are judged upon top speed, maneuverbility and acceleration, with no two vehicles handling the same.

Eat My Dust [is] a mixed affair. Although each course serves its purpose, the graphics are not anything special, and need a powerful PC to run smoothly on. Even then the game suffers from a slow frame rate which gives the game absolutely no sensation of speed whatsoever. For example, vehicles travel at speeds of 200mph, and the screen does not move any faster than if you where to travel at 100mph. The courses, which consist of a speedway, a course featuring a martian landscape, a rally course, and a ghost town, are all varied (graphically at least), although the designs remain farly basic throughout. One problem with the courses is that they are too narrow for the width of the cars, often resulting in irritating car jams. Every so often, the game will freeze midway thriugh a race for no apparent reason, and then restart when you least expect it to, leading to severe frustration. Another problem with the actual game sometimes occurs when a collision takes place. Occasionally a crash will take place and your vehicle will become stuck in parts of the scenary.

Eat My Dust offers nothing new to the racing genre. The graphics and the gaqmeplay have all been done before, and been bettered. Sierra have obviously aimed Eat My Dust for a younger audience, and due to the limited gameplay, this is the only audience I can recommend this to." But even that younger audience is well advised to stick with Mario Kart on the console systems rather than play this inferior copy-cat. 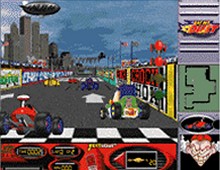