Decent conversion of one of Konami's earliest hit arcade games. When Double Dribble made its debut on arcade machines in 1986, it was hailed as a revolutionary game in early competitive sports gaming. This basketball game offers both artificially intelligent computer opponents and player-vs-player competition. It was the first game to incorporate the national anthem in pre-game introduction, as well as cinematic close-ups of notable shots (e.g. slam dunks).

This PC version is naturally inferior to the arcade original in graphics and sound quality, but it does retain the fun gameplay of the original even if the keyboard interface is very awkward, and cannot be re-mapped to your preferences. The game is decidedly an arcade-style game: you don't get to play the entire league or tournament here-only the final game against LA Lakers in a fictional championship series. Anyone looking for a solid simulation of the sport should look elsewhere, as Double Dribble has a complete lack of coaching options. Meanwhile, arcade fans looking for a few minutes of dribbling fun will have a blast with this nostalgic old game. 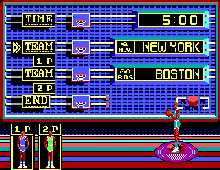 People who downloaded this game have also downloaded:
Double Dragon, Face Off, Lakers vs Celtics, California Games, Blades of Steel