College Slam is a fun basketball game that is essentially a carbon copy of Acclaim's earlier NBA Jam Tournament Edition, except with NCAA teams and players instead of NBA ones. There are some additional features, but they are more troublesome than useful. For example, you will need to manually enter the names of your favorite team's all-star players, since the game includes only actual schools but not actual player names. One of the better new features is "Records," which lets you record a full college season. The college march music in the game is also quite nice, although repetitive after a while.

Because the game is basically NBA Jam: TE in new clothes, the bottom line is naturally that if you like that game, you will likely like this one too. Of course, you can also pretend that NBA teams in NBA Jam: TE are your favorite college teams, to spare the bandwidth and time spent downloading this one ;) 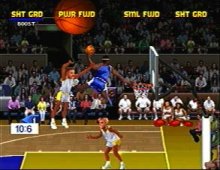