One of the more original sports games I've seen, Konami's Boot Camp is, as the name implies, a game about life in the military camp. The goal in each level is simple: get to the end of the obstacle course before the computer-controlled soldier. Instead of hurdles, you will jump over makeshift mounds; you will also climb walls, criss-cross overhead bars, and more. Gameplay is basically track & field meets gymnastics, and after the novelty wears off, there is little behind the different graphics and scenery that makes Boot Camp different from, say, Microsoft's Decathlon in basic gameplay. Still, the attractive split-screen perspective, excellent controls, and surprises on every level keep the game from becoming boring. Boot Camp is a fun an innovative sports game-- just don't expect it to be the next California Games. 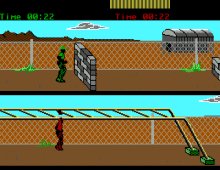