As one of the Amstrad's legendary games, Basket Master was well known title in the late eighties. It was fun, addictive and quite enjoyable game. I never liked it much due to pretty hard controls but I also played it a lot.

You play a game of one-on-one basketball. There aren't any spectacular moves and shots, but the game is quite hard. You might enjoy playing it for a while.

Basket Master must be one of the most simple basketball games ever made. You play one on one against the computer or another human player and when you play against the computer you can pick several different levels to play at so you both get a chance to win when you are new to the game and a good challenge once you have played the game for a while.

The setup of the actual game is quite and I like that you can choose your own control keys. Sadly this doesn't help much in the actual game since the players are slow and they also move quite weird. It also seems randomly whether you can grab the ball from your opponent as this can be done just by standing next to him. What I don't like above sport games where it's one on one is that you can't do much tactical in order to win. In this mode you always block the player as you only have to concentrate on one opponent player.

The graphics are in CGA mode but are actually better than many other games in CGA mode but the basketball field could have used some more work since it's simply too little. The sound is of course annoying PC speaker quality and I didn't find a way to disable it either. Basket Master is not recommended simply because of better games like TV Sports Basketball made by Cinemaware.

Basketmaster is best described as the worst basketball game ever. Simple as that. To me there is no excuse for a game in which the opponent only has to touch you (and you have no way to avoid him touching you) to get the ball, while on the other side you touching him does not have any effect except for him getting 2 free shots and you getting accused of playing foul. There's simply nothing you can do to prevent losing... losing without scoring once... losing without even shooting at the basket once... at least not as long as you are playing against the computer.

Why am I even posting a game that is so bad? Well, first of all worst games of its genre got a certain charme and collectors SHOULD have them (you got to know the bad to be able to see the good... or so ;) ). And also... REVENGE! Can't do anything ingame - but I can tell the world how ridiculously bad this game is. Ha!

Basket Master is a simple one-on-one basketball game from premier Spanish developer Dinamic Multimedia. The focus is on pure, unadulterated action here: just choose one- or two-player game, and presto-- you'll be out on a CGA court trying to score (with the ball, of course). Although difficulty level can be toggled ("amateur" or "NBA"), needless to say the game is much more fun when you play against a friend. Controls are intuitive: bar charts at the bottom of the screen help you adjust the strength of your shots, although realism is kept to a minimal (e.g. the ball always bounces to the same height regardless of the throw strength). Overall, Basket Master is a decent diversion that doesn't aspire to be much, but is good at what it does.

Nice little basketball game. Play one on one against computer or friend. Gameplay is okay and the graphics are fun 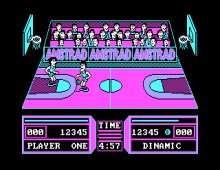 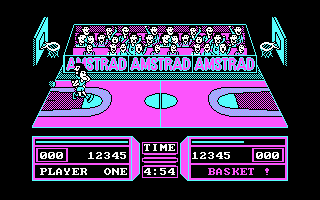