Begin 2 is a classic shareware space combat simulation set in the Star Trek universe. Inspired by the Starfleet Battles board game (which was also an inspiration for Interplay's Starfleet Command), Begin 2 is the best game I've played that utilizes turn-based gameplay with simultaneous execution of combat, featuring combat between up to 50-plus ships at a time.

What really makes this game shine is the true-to-Star-Trek complexity of the orders you can give to your officers: you can dock at space stations, lock tractor beams on friends and enemies, launch probes, and try to take over enemy ships by beaming over marines. You can also communicate with your allies, ordering them to escort a friendly vessel or hold fire (whether your allies feel like following your order is another matter altogether -- an Orion pirate ship on the verge of disintegration will choose to leave you to deal with the enemies while making a hasty retreat, while a Romulan warbird will ignore your retreat command and self-destruct, trying to take as many enemies with it as possible).

The 1984 version is text-only, while the far-superior 1989 one (the version for download here) has simple graphics. There is no mouse interface -- all commands by the user have to be typed in, which is part of the game's charm, as the commands have a very Trek-type feel to them. "Lock phasers on Enterprise" or "Tell Excelsior to torpedo the Whirlwind" are all valid commands. Despite the game's complexity, the learning curve is not as steep as it might have been, since only a few maneuvering and weapons commands have to be learned in order to start playing. A comprehensive manual and a handy command guide make learning this game enjoyable.

This is a game that is dying to be updated with a mouse interface, a campaign/mission mode, and better graphics. It is a true old game classic, with small but loyal following. Highly recommended! 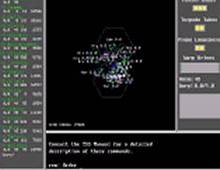