Fleet Tactical Combat Simulator is an excellent shareware simulation by small developer Smoke and Mirrors Studios that offers a very detailed tactical combat engine that will please die-hard fans of Starfleet Battles tabletop game (on which Interplay's excellent Starfleet Command series is based) and the classic Trek text-only sim. Jeff Kang of Games Domain says it all about this game in his very thorough review:

"The setting of Fleet is the not-so-distant future in which humanity's reckless colonization of the galaxy has brought it into contact and conflict with an alien race. You must resolve the conflict in favour of one side or the other by playing the missions as either the Human or Dorrian commander. The missions are non-consecutive and can be played in any order, representing a series of encounters between Dorrian and Human ships. One aspect of the game which I noticed immediately was the game's strong affinity to Star Trek. Whether this resemblance was intended or unconsciously applied is questionable, but the terminology and combat system used in the game will make Trekkies feel right at home. Combat in Fleet takes place between a small handful of ships rather than squadrons of fighters, and at no point in the shareware missions will you ever need to worry about controlling more than two ships. This may be a turn-off for those of you who envision huge epic battles involving hundreds of fighters, but as you play the game you'll soon come to tolerate and appreciate this small number of ships due the detailed and intricate controls.

Basically, the reactor of your ship produces a certain amount of energy that can be diverted to throughout your three main systems: Helm, Weapons, and Defence. You must manage your energy consumption carefully to make the most efficient use of available energy while keeping all three systems running at an optimum level. The Helm is the navigation system through which you dictate the speed and course of your ship. There are automated commands such as Intercept, Evade, Ram to simply navigation, but you may also take manual control of the thrusters for pinpoint maneuvering. Weapons provide your controls for offensive purposes, allowing you to arm, target and fire your armaments. Defence is where you control your shielding and monitor your ship for damage. Shields are not simply toggled on and off, but rather are divided into a series of areas to which energy can be allocated to. For example, if the enemy ships are attacking from the port side of your vessel, it is not necessary to maintain a high shield level on your starboard. Tweaking your deflectors in response to the relative position of your enemies helps to ensure that plenty of energy is available for the other two systems.

Fleet has a lot of potential as a combat simulator. The game system leaves a lot of room for the development and application of tactics. In addition to the standard controls, there are many tricks and intricacies to master-- using planets for cover and as choke points, piloting your ship for maximum usage and accuracy of weapons, evasive maneuvers for dodging enemy projectiles, using kamikaze ramming to make the best out of bad situation, etc, etc, etc. The variety of tactics provides for diverse and interesting gameplay, especially against another human. The AI is acceptably functional but will fall to the same strategy every time once you have solved a mission. As with any game, nothing beats the challenge of another person. Fleet provides support for this through two-player network and modem play via turns. Two player may also choose to play at the same computer, although this may be more trouble than it's worth due to importance of secrecy and surprise.

The registered version of Fleet also provides ship and missions editors to fully customize the gameplay. This offers the flexibility of creating and playing a near endless variety of combat scenarios, and greatly extends the game's longevity. You'll only bore of the game when you bore of creating new missions to challenge yourself and your friends. The ability to play each mission from both sides is also a bonus.

Fleet is game worth checking out if you have a mind for strategy and tactical combat. The learning curve is a bit steeper than your average shareware download, and you'll need to invest some time and patience to read the somewhat bland documentation. However, your efforts will be rewarded with a challenging game with the depth to keep you playing, especially if you find the game worth registering. The graphics won't turn too many heads and the sound effects are pretty much non-existent, so if it's frills that you're looking for, then you're better off looking elsewhere. But for those of you who would enjoy a traditional turn-based strategy game with lots of flexibility, and value gameplay more than graphics, look no further." 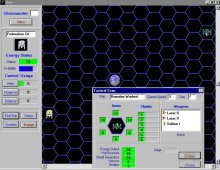