Definitely one of the best and most faithful Star Trek simulation game I've ever come across, Visual Star Trek is a perfect example that bigger doesn't necessarily mean better. Almost every system on the Enterprise is accurately modelled, down to the status reports. You can choose the universes ranging from tiny for a quick play to enormous for a real campaign, the enemy AI is competent, and there are always battles to fight and zones to explore in this dynamic simulation that few know about. 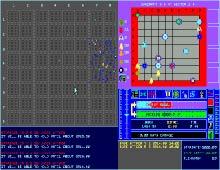