Billed as an "authentic "Star Wars" simulation," Defcon 5 is called "second worst computer game of all time" by Computer Gaming World, and for good reasons. Fans of complex, realistic modern Cold-War simulations will detest the game, while everyone else will find it too dry, simplistic, and boring.

You are in control of the US' Strategic Defense Initiative (S.D.I) "Star Wars" space-based missile defense system. Your computer is in command of a network of orbiting visual reconnaissance satellites and an awesome arsenal of sophisticaed space based weapons. Using realistic military commands, you control nine separate weapon systems including land based chemical lasers, space based free electron lasers, neutral particle beam weapons, electromagnetic launchers, and many more. With the Cold War escalating into the inevitable nuclear showdown between the US and USSR, the fate of the world is in your hands. Your task is to destroy the missiles in time to save the human race, and deploy neutral particle beam warfare for the space based battle.

In a seemingly authentic replica of actual "Star Wars" system (albeit one that has been scaled down), the game is played via display monitors that show the status of incoming enemy warheads, various weapon systems, and so on. There are some graphics in the game, such as the world map, but most of the action is text-only. Many of Defcon 5's options are seemingly for show only-- there seems to be little difference whether you choose a neutral particle beam, or an electromagnetic launcher to fight the warheads. It is also often hard to tell which direction the warheads are moving towards, and the distinction between friendly and enemy fire. Not to mention the fact that the game plays more like a dressed-up version of Missile Command than a realistic simulation it's trying to be.

Regardless of these quirks, Defcon 5 deserves notice as one of the earliest games made about the Cold War. Fans of simulation games should stay away from this very simplistic introductory game that's barely simulating anything at all. 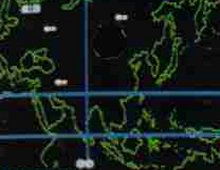