AV8B Harrier is another simulator using Simis' popular graphic engine. The sim is similar to KA-50 Hokum in gameplay. You have at your disposal some Harriers and with the excellent mission map/planner you can plan your missions and then execute them.

The sim puts you in a conflict in East Timor, a former Portuguese colony. The area was annexed (some will say "integrated") into Indonesian territory in 1976. It proved to be a painful thorn in the flesh for the Indonesian government as the province had been restless ever since the Portuguese left in 1975. Even after the recent referendum, in which the residents of the province voted to go separate ways with Indonesia, it is not yet free of troubles. In the conflict portrayed in this sim, you'll be flying against Indonesian Air Force aircraft, which include A-4 Skyhawks and F-16 Fighting Falcons. A very unlikely scenario today in light of the current developments in Indonesia, but very valid during early 90's.

The sim itself portrays the AV-8B Harrier quite convincingly, considering the technological limits of those days. The graphics is very good and the mission planner is quite powerful. The campaign is not in the same level as the one in Falcon 3.0, but is very good nevertheless.

In summary, AV8B Harrier is a worthy game to pick up. The timing is almost perfect, too. Today many people start to gain interest (again) in the Harrier but in light of the bleak future of the flight sim as a genre, there is little hope that someone will release a Harrier sim. So, this game might be able to give some interesting diversion for Harrier fans. Just remember to use Moslo and run the game in full DOS mode (I could not run it properly otherwise). Furthermore, recent development in East Timor (or Timor Lorosae, as it is now called) should give some needed atmosphere. Remember, though, that the choice of operation area was a controversy back then, and even now some people may still find this game a bit controversial.

Note: If you like the game, also check out Super-VGA Harrier, a great updated version of this sim. 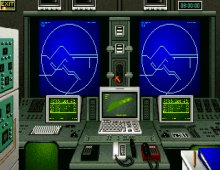