Rally racing has always been fun... for the most of time. This product by Gremlin is nothing special. You drive Toyota Celica GT and compete with the other computer and human opponents.

The controls are a bit...bad. I had hard time when turning the wheel from hard left to right and vice versa, so I suggest you play the game with a joystick. One real nice thing about this game is an option that lets you take a look at the track before racing and you can also set warnings for yourself.

If you are a fan of the popular Test Drive series you will without doubt see several familiar things when you start Toyota GT Rally. It got pretty much the same interface as Test Drive and the controls and landscape as well. You will find many other similarities if you go deeper into the game which just shows that the originality isn't very high in this racing game which is a bit disappointing.

What I find most interesting and also most surprising is realism in the game. While earlier games like Test Drive didn't have an almost real life steering system in place it was at least decent. The steering system in Toyota GT Rally is very bad. Not only does it feel as you can only straight forward unless you want to risk turning your car completely towards to the left or right. It's very difficult to just slide a little bit to one of the sides and at the same time it's very fast reacting. If you do accelerate you can quit easy drive into something is the road just got a longer corner. And if you do drive into something the entire front of the car is completely damaged even if you aren't driving very fast.

Each race is only allowing a certain amount of time to complete the race and often not very long time either. Thank god for that as you would otherwise have to look at the boring landscape that is the same over and over throughout the game. It would have been nice if the developers had used a bit longer on this since it would have improved the game quite a bit. This game is only for racing fans but if you haven't played Test Drive yet it is recommended above this game any day.

Despite endorsement from one of the world's leading auto makers, Toyota GT Rally is still a pretty poor rally racing game. The partly 3D, partly bitmapped graphics looks okay, and I also noticed nice PC speaker music, which actually sounds better than the ADLIB one. But other than these bells and whistles, Toyota GT Rally doesn't have much to boast in the gameplay department. Car handling is decent, but the serious lack of consideration for real-world physics means that it feels more like you're driving a rocket (or, say, a hovercraft) than a car. The tracks are uninspiring, and the tournaments are too easy to beat-- just hold down the accelerate key for as long as you can. Not recommended at all, unless you're a die-hard racing fan who must own every game in the genre ;) 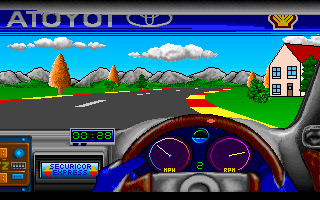