Top Gun: Fire at Will

Top Gun: Fire at Will is a fun action-oriented flight sim from Spectrum Holobyte, designed to attract flight sim beginners to the genre with fun missions based on the hit movie and excellent graphics. Die-hard flight sim veterans will probably frown at the game?s lack of realism and the low level of challenge, but everyone else will probably enjoy the game for what it is: a fun, atmospheric sim that puts you behind the cockpit of one of the world?s best-known fighters.

One of the things I like most about TGFAW is that it really recreates all the excitement of the movie, both in and outside the cockpit. Although it doesn?t have the intricate plot and sub-plots of Wing Commander, the game gives you a strong sense of being in Maverick?s shoes. The action begins at Top Gun School, where you will compete for the coveted Top Gun Trophy. This competition is set against a backdrop of a burgeoning global crisis, which is reflected in the urgency of your missions that escalates in importance the more you play. You will get to choose characters from the movie as your wingmen. Many FMV cut-scenes (missing in this rip, due to their large size) are very well done, with a convincing cast that rival their counterparts in the movie. The downside of this plot-based approach is that you need to keep important wingmen alive to play the next mission and see the plot progress, and the game doesn?t offer any ?plot branches? that the Wing Commander series does. The nuisance is minor, though, because the game is quite forgiving to beginners. I?m not a flight sim fan by any means, yet I?ve managed to survive quite a few missions into the game. All the main characters from the movie are present in the game, and they do add a lot of atmosphere. You will constantly hear chatter from motor mouth Merlin in the back seat, for example, and chuckle at Raven as she chickens out of most encounters. Stinger, characteristically, blasts off into the fray without orders ? just like Maniac in Wing Commander, only to get into serious trouble that you have to bail him out of.

The graphics in TGFAW was cutting-edge for its time, and still looks very good today. The missions in the grand canyon, which give you the whole view of Top Gun school, are especially fun to play. There is nothing more satisfying than finishing in the top of your class at Top Gun and buzzing the tower upside down ;) Because the game doesn?t focus on realism, the virtual cockpit is virtually useless ? you can?t interact with it. The invisible cockpit mode is much more satisfying. Although the game isn?t complex, the enemy planes behave quite reasonably well as far as I can tell: they gang up on you, trick you into an ambush, and check their airspace constantly for any enemy activity. Overall, if you enjoy flight sims that place more emphasis on fun than on realism ? just like Dynamix and LucasArts? classic sim of yore, you will probably enjoy Top Gun: Fire at Will. 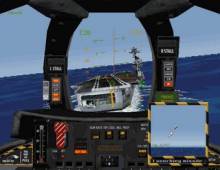 Top Gun: Fire at Will screenshot