Top Gun Danger Zone is a fun arcade-style flight simulator based on the hit Tom Cruise movie of the same name. The goal, of course, is to become a Top Gun abroad the USS Brigham. You'll get to fly 2 modern fighters: the F-14 and F-18, each of which has its own instrument panels and semi-authentic aircraft handling. Flight sim grognards will undoubtedly find many flaws in the physics department-- even though I know next to nothing about flight sims, I can still tell that the plane shouldn't be able to quickly bank like a bike ;) What makes Danger Zone a lot of fun to play, though, is the career mode and the excellent atmosphere of being a rookie pilot. While you're not on duty, you have many things to do on the USS Brigham. You can talk to other officers to pry them for help -- but you won't get it immediately. You will need to survive a few missions before the officers will accept you as a peer and offer useful flying tips, among other things. This is a great feature, and makes life outside the cockpit much more interesting (similar to Wing Commander). You can also challenge other pilots in one-on-one dogfights to improve your standing on the "Top Gun Challenge Board" on the ship. On the downside, the game is disappointingly short, with only a handful of missions, and enemy AI needs a lot of improvement.

If you're a die-hard pilot, you'll probably be turned off by Danger Zone's arcade-style combat and many technical flaws. If you are an arcade fan who don't care much about realism, and want a good simulation that really immerses you in the storyline, though, you'll have a lot to like in Danger Zone. Recommended for casual pilots only. 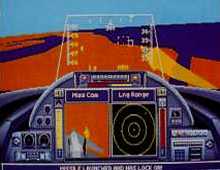