One of the best games ever made for Commodore 64 that sadly got little attention on other systems, Tau Ceti is a classic space simulation that is still regarded by some armchair space commanders as the best game of its kind ever. What makes Tau Ceti special isn't the attractive graphics (though it was well ahead of its time)-- it is a myriad of innovative designs, all combined into a great gaming experience.

The plot is cliche, but passable: an abandoned space colony near Tau Ceti has been overrun by robot warriors. As veteran pilot, your mission is to disable the robots' defense system by first collecting and assembling the reactor rod pieces located throughout the colony's many cities. Afterwards, you must put the reactor rods in the central reactor and get the hell out. You will pilot a skimmer, a fast ship replete with 4-way viewscreen. But piloting the skimmer and shooting down pesky robots is only half the fun, and you'll quickly discover that Tau Ceti is not just a fun arcade shooter. When you land on various cities on the planet, you can discover useful items, or even read interesting information on the backstory and your mission while docked in a city library. You can assign repair priorities when your ship is damaged, and directional indicators will help you get a bearing inside a city and to locate jump pads. Interacting with the ship's computer is done via interactive fiction-style parser, where you type commands such as LOOK, MAP, and even PAD (to record your progress). This is unconventional for a space sim, but very effective.

In short, Tau Ceti is a must have. It's a wonderfully deep space simulation that weaves elements of adventure and even strategy into one hell of a game that truly stands the test of time. Definitely a perfect example of the idiom "the whole is greater than the sum of its parts." Don't miss this one, folks. 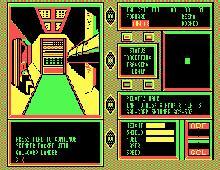