The game itself allows you to fly three aircrafts, the Eurofighter, the F-22, and one I haven't really recognized, shame on me... anyway, the important aspect is that they handle different from one another and different too is their payload... the Eurofighter for instance will always be on lack of fuel, but carries a lot of missiles, the other way around is true for the F-22... the third plane is a balance beetween these two extremes...

The story isn't that important, there is a war and you're gonna help the "good guys" win it, this is a war game after all, it doesn't need much of a background... it needs realism, atmosphere, and difficulty - and TFX has plenty of these.

Technically the game is "good"... graphics compared to nowadays standards are really sub-par for a flight sim, but at least we don't have the "green plain with pyramids", but a "true" landscape, sound on the other hand is excellent and helps in creating an outstanding feeling of urge in the player...

Ah… the 3rd member of the 1994 ruling triumvirate of military flight sims (the other two being F-14 Flight Defender and Tornado, TFX sported the best graphics around at the time, with lots of detail in those polygons. In TFX you are a UN pilot that is placed in several campaigns. There are three flyable aircraft, the Eurofighter, the F-22 and the F-117. There are a lot of missions, adjusting to these three planes as needed. The VGA graphics are pretty good, being excellent sometimes. The sounds is also very good, with the annoying exception of the "lizard family" (every time you lock an enemy fighter the game goes off with "Traaaacking… looks like a lizard"… by their sheer numbers, obviously lizards rule the Earth in TFX). The music isn't bad, but very annoying. The CD version only increased the sampling quality of the music, making it less annoying, unless you have a personal distaste for anything techno or sampler based.

Flight modelling is good, while not true to life. The EF burns up his fuel in a second, which isn't really realistic, while the American aircraft can fly all day long. Many weapons are modelled (including a treat for the real pyros among you - the air launched version of the Tomahawk) and they perform reasonably well. Bear in mind that you maybe stuck on one of the training mission, which will prevent you from entering the campaign. Just look around the Web for cheats and you'll know how to skip the infantry mission. Recent similar games include EF2000 (which was its direct descendant), Tatcom, and F-22 ADF. 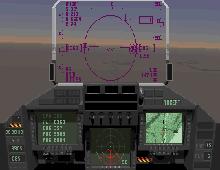