Another excellent, groundbreaking flight sim from Simis. Basically a huge graphical update over AV8B Harrier Assault, released months earlier. Apparently Simis put "Super-VGA" in the name to celebrate the fact that it was the first SVGA flight sim ever made ;) "This was the first SVGA sim, which meant that instead of VGA graphics of 320 x 200 pixels, we now had 640 x 400. The visuals were similar to what we had previously only seen in military simulators and in a beautiful set of pastel colours.

This sim became an unwitting participant in the censorship debate in Australia as the Catholic Teachers Federation, apparently eschewing the formality of reading the manual let alone playing the sim, asked for it to be banned on the basis it was offensive to the East Timorese!

The flight model was very fluid. There were Indonesian F-16's and A-4 Skyhawks as well as C-130's to shoot down (or be shot down by!), and palm trees, huts and barracks to bomb.

Because of the limited resources and the nature of the campaign, you felt really involved with the progress of your ground troops. Occasionally the fleet would come under air attack as well and you could watch the action from the "pri-fly".

The campaign progressed in real time. You controlled the Fleet, Ground Forces, Attack Choppers, Special Forces (to lase targets for you), Infantry and of course your limited supply of Harriers. Actually all the resources were limited and the campaign quite quite difficult to win (actually I never once won it!). As time went on you flew in daylight, dusk, night and dawn.... all with appropriate lighting effects. SVGA Harrier had immense replay value as the campaign never played the same twice, and it was entirely up to you as to how you win the ground war.

NOTE: I found it impossible to get this classic sim running under Windows 98, unfortunately it doesn't seem happy with 3D video cards. If you have an older conmputer with an S3 graphics card you should be able to run it." 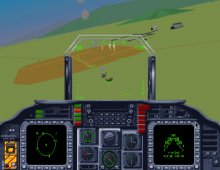