I can't say Super Huey is one of the most advanced flight simulation games ever made. When you start the game you have four choices - Flight Instruction, Explore, Rescue and Combat. Rather disappointing that there aren't more options in a game since it quite fast gets boring to just fly around.

Sadly the game doesn't really offer anything besides the very simple interface and controls and you will quickly get tired of Super Huey. At least to me there isn't much "Super" in the game and maybe it should just be called "Huey". Overall not a recommended game unless you are a fan of this genre as it simply doesn't offer anything special.

One of COSMI's best releases, Super Huey is a fun modern helicopter simulator that won a lot of praise from the Commodore 64 community when it was first released in 1985 for that computer. It was not only one of the first helicopter sims ever made, but also was famous for introducing a number of features that many armchair pilots now take for granted, the best of which is the excellent flight instruction mode. The game actually tells you which keystrokes to press, and in what order.

Gameplay, unfortunately, is very limited: there are only three missions to fly: explore, rescue (a POW), and combat-- all of which take place over nondescript landscape, with little variation. Flight mechanics and realistic aerodynamics are seriously lacking, and it is obvious that the game was targeted towards flight sim newbies than veterans. Still, intuitive controls and excellent tutorial makes this one of the better introductory-level sims, and a good "beer-and-pretzel" cockpit exercise that veterans can easily get in and out in a breeze. The PC version was much less well-known, although it adds bright, more detailed EGA graphics.

This is the PC Version of the famous commodore 64 game.

The original Super Huey sold well over a million copies and achieved a market penetration of close to 12 percent, stated Cosmi Corporation President and CEO George Johnson. Super Huey was one of the few games in the eighties to actually capture a loyal audience and achieve worldwide name recognition. 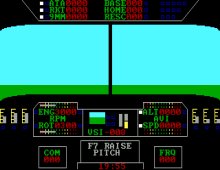 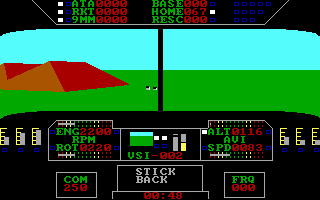