One of the best 3D tactical combat simulations, I really don't know why this game never made it into any Hall of Fame. In SEAL Team, you will assemble a 4-member SEAL team to carry out missions in the Mae Khong Delta during the Vietnam War. Missions cover a wide range, including espionage, rescue, recon, and demolition. The game's graphical and sound atmospheres are excellent (you'll know enemies are nearby from the boot-cracking sounds), as is the authenticity of hand signals, weapons, medals, and so on. There are dozens of SEAL commandos under your command, and you must be careful to let them all experience combat, or you might end up with only a handful of veterans but dozens of "green" soldiers. Each commando has different character statistics and specialty, and you will grow quite attached to them as the war wears on (although not to the personal level as Jagged Alliance).

For all its resemblance to other first-person 3D shooters, SEAL Team was definitely not designed for action gamers, because patience and observational skills are key to winning in this game: as in real life, you'll need to wait minutes, or even almost an hour, to ambush enemies successfully. Such long pauses when nothing seems to be going on will doubtless turn trigger-happy gamers off, but those who crave realistic simulation of Vietnam War will be well-rewarded with a very deep and engaging game. 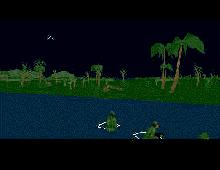 People who downloaded this game have also downloaded:
Longbow 2, Aces of The Pacific, Strike Commander