Every once in a while, some designers seem to have the gut to do something different. Exceptional technical achievements aside (Falcon series and Flanker come to mind), in the flight sim world this either translates into the modelling of some "unsexy", "unglamorous" or simply "little known" aircraft, simulation of an obscure war or combining other "non-sim" elements into a flight sim.

Su-25 Stormovik (or Sturmovik in correct Russian spelling) is one sim that tries to simulate a little known attack fighter, the Su-25 in a uniquely Russian perspective during the troublesome early '90's era. The Su-25 (NATO callsign Frogfoot) is the closest Russian equivalent to the American tank busting A-10 Thunderbolt II. It is also interesting that its shape closely resembles the YA-9, the losing competitor to the YA-10 (eventually developing into the A-10) in the USAF competition for a new attack aircraft. Thickly clad in armour and fearsomely armed, this aircraft has proved its mettle in many combat theaters, most recently in Chechnya.

This sim from Electronic Arts casts you as a Russian pilot during the early 90's, flying missions that will slowly uncover the hideous plot in the Russian government. Being an attack aircraft, your missions are mostly ground pounding and recon and are quite interesting. The flight model is quite convincing for its time. Perhaps, not in the Falcon 3.0 standard, but definitely better than average. However, the control scheme is a bit questionable. Flying with keyboard or mouse is very difficult because the game follows a rather different control scheme than usual. Playing using a joystick is the way to go here, although many feel that it's a bit too responsive to the joystick input. The graphics closely resembles Chuck Yeager's Air Combat, which is to say that it is fairly good, although poor by today's standards.

Overall, this is a good sim to play while waiting for the next Su-25 sim that will (hopefully) be included in the next installments of Su-27 Flanker series from SSI (Flanker 2.5? Flanker Attack?). Note though, that if you have anything better than a Pentium, you have to use Moslo to play this game. Otherwise, you won't be able to takeoff! 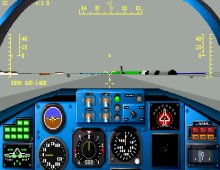