Chuck Yeager's Air Combat is a classic modern air combat simulation that set new standard for the genre at the time of its release. Designed by Brent Iverson (LHX Attack Chopper), the game boasts very realistic controls, a large amount of planes, and nearly endless missions that span 3 theatres of operation. Trixter said it well in his thorough review of this seminal classic for MobyGames:

"CYAC is about air combat, pure and simple. You can quickly design your own missions to fly, or jump into over 50 historically-accurate missions across three war periods (WWII, Korea, and Vietnam), some of which were recounted by Chuck Yeager himself. The handling of the planes is perhaps why CYAC is still played by die-hard sim fans today--it's accurate. Not perfect-down-to-the-last-detail accurate, but most planes just feel right. So "right", in fact, that your success at achieving certain mission objectives depends on knowing what you plane can and cannot do. (Not only are each plane's specifications listed in the manual, but you can bring up a window with a real-time flight envelope to see how and why your maneuvers are stressing the plane!)

Unlike most celebrity endorsements that are shamelessly used to sell a product, Chuck Yeager worked closely with the designers to make the simulation more accurate. His experience in actually flying all of the planes contributed to how they feel in flight and combat, and also helped design certain aspects of the simulation itself (the addition of clouds, for example, was something Chuck insisted on, since they can be used to a tactical advantage).

Speaking of which, the simulation was very well coded: Brent Iverson's graphics routines are extremely well-optimized. The game is perfectly playable on a 286 with VGA, and is mostly playable on an 8088 if the details settings are turned down. The 3D plane models are simple enough to be drawn quickly, but complex enough that they don't look like flying bricks. In addition, there is a VCR-like replay feature that lets you not only replay several minutes of action and save/load them to/from disk, but you can change the camera angle/zoom/viewpoint. For example, you can switch to the enemy's point of view during playback to see how he snuck up on you!

Finally, the documentation that comes with CYAC is exquisitly detailed, with over 150 pages of full-color plates, quick tutorials on air combat maneuvers, a quick-start that shows you the basics, and a full history of war in the sky. The manual significantly adds to the game's value.

There are only two things wrong with CYAC: weak campaigns, and no multiplayer support. The lack of multiplayer support is a real shame, since not only does CYAC provide a great vehicle (no pun intended) for dogfights, but the Macintosh port does support multiplayer, even over a network! Come on, Brent, what happened?

This is an amazing flight sim for your PC! Play air combat with old aircrafts against the computer. The controls are very easy and during play you can set a lot of stuff in the menu (using Escape) The most beautiful feature are the g-forces which are shown using the fading the screen in to another color. Go check this one out. A must! 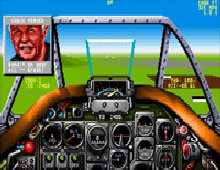 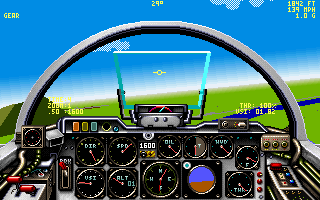