Striker is a fun freeware clone of Atari's Defender. As helicopter pilot, your mission is to navigate various tunnels in order to complete five missions of increasing difficulty. As you fly the helicopter through 2D side-scrolling landscape, you must deal with 5 different kinds of aliens, gun turrets, enemy missiles, and other obstacles. To handle these threats, you are given two weapons: bombs and bullets. As in Defender, you must constantly replenish your aircraft's fuel level by collecting fuel canisters that are scattered on the ground. In addition to fun gameplay, Striker allows you to choose from 4 difficulty levels and redefine every controlling key to suit your preference. You can also pause the game, toggle sound on and off, and play the game with a joystick. All in all, a very nice freeware game from the early days of PC gaming. Too bad the missions are over all too soon, and there is no random element to enhance the limited play value. But if you like Sopwith and similar games, you will have fun with this game while it lasts. Recommended! 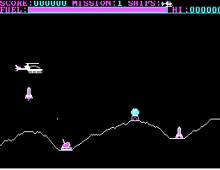