"Flight Commander 2 is an excellent tactical level air combat simulation by Big Time Software, distributed by Avalon Hill. Unlike a flight simulator, FC2 uses a turn-based "board game" format, so you control lots of planes at once from an overhead map view. Each "counter" represents one aircraft, ship, ground target, SAM site, or missile. All the aircraft included in the game are jets, but there is a HUGE assortment available, from the early 1950's to the present and beyond, amounting to about 70 different major types. Counting the multiple versions included of many planes (e.g. F-14A, F-14B, and F-14D), there are actually over 110 types to choose from... With so many plane types included in one game, it would be easy to imagine that they'd start to all feel alike after a while. Thankfully, there are many attributes that are set for each plane beyond the usual thrust-to-weight, top speed, and wing loading numbers, and taken as a whole they give each plane a unique character....All the attributes of each aircraft and missile type are documented in the online data library, along with pictures and brief historical writeups. Plenty of interesting reading here.

So what's it like to play, you ask? At first, it's humbling. The A.I. is quite good. When first I started out, I played the "Top Gun" mission several times at the maximum difficulty setting with all realism options turned on (I don't believe in starting slow!) and got whipped every time no matter which side I took, student or instructor. Eventually I realized I couldn't just move the pieces around and blow stuff up; I had to use real tactics. Some scenarios really hit home the advantages of speed and T/W over maneuverability that novice flight sim fans never seem to grasp. Flying a turning machine doesn't buy you much as you watch helplessly while faster but less maneuverable bandits retreat out of reach then come back at you fast from opposite directions, forcing you to show your tail to one or the other. And going one-on-one, the advantages for the high T/W fighter of using the vertical, doing high yo-yos and such is very plain to see, while in a normal flight sim this is difficult for many people to visualize.

While a board game cannot hope to capture the immediacy of performing BFMs in a dogfight as well as a first-person flight sim, for me, Flight Commander 2 provides a fun and enlightening way to experiment with multiple aircraft tactics. Its inclusion of many planes that are simply not popular enough to warrant their own conventional flight sim is just a welcome bonus." 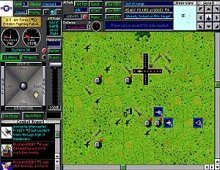