Probably the most obscure game LucasFilm (now Lucasarts) ever released, Strike Fleet is a surprisingly good modern-day naval simulation, especially in light of their expertise in adventure games. It's not realistic by a long shot, but it's eminently playable and fun. The game is sequel of sorts to LucasFilm's earlier P.H.M. Pegasus, but with better scenarios and more realistic gameplay. Your job is to lead the US fleet through increasingly challenging missions set around the world, including the Persian Gulf. The game's strongest point is the interface, which is very intuitive: all controls to each of the ship's stations are laid out nicely, and it's very easy to switch stations and order most commands with a keystroke. Overall, this is an innovative but little-known real-time naval simulation that isn't the most realistic, but is highly playable. 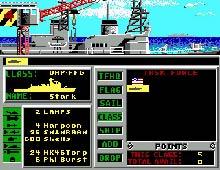