StarGlider 2 is an incredible successor to the classic space sim StarGlider, sporting significant improvements over its predecessor. This time you can travel between planets, fight space pirates, trade cargo you got from destroyed ships with the help of your tractor beam, fly upon and inside planets, and -- of course-- shoot everything that moves. The graphics are no longer just wire-frames but solid filled objects.

There are plenty of things to shoot at and explore in StarGlider 2. In space you can get swarmed over by pirates, which is where most of the fun is. After you dispatch your foe, you can use a tractor beam to collect the cargo he was carrying. You can then trade this cargo for weapons. On the planets' surface there is a wide variety of foes to destroy, ranging from tanks to fighters to blow up. The planets have an underground tunnel system with little rooms where you pick up extra missiles and ammo. The game is so immersive that you'll really feel the sensation of flying over a planet's surface, in space and in huge tunnels inside the planets.

StarGlider 2 is not just a shoot 'em up space sim like its predecessor. The game has adventure elements in terms of "quests" you can solve that will provide you with new weapons and goodies when you complete them. Most of the quests can be found in tunnels, and involve catching something with your tractor beam and trading it for weapons, although there is a few unique ones, such as one that requires you to capture a space whale to trade for a ship enhancement. Although the polygonal graphics are simple, the animations are so well done that the ships move the way you would expect them to move. In addition, each planet you can travel to has its own atmosphere. Dante, for example, is like hell (not surprisingly). It is littered with volcanoes that spew lava that can kill your ship.

There are so many things to see and do in StarGlider 2 that you will hardly notice the time when it's 6 AM in the morning. It may not have the same level of depth in diplomacy, adventure, and economics that Elite does, but its spaceflight model and sheer addictiveness are second to none. If you are a space sim fan, StarGlider 2 is simply a must-have. 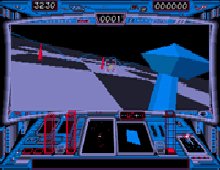