Many oldtime wargamers will surely remember Ed Bever,designer of many classic wargames such as Command Series (with Sid Meier) for MicroProse and No Greater Glory for SSI. After a long hiatus from commercial PC gaming, Mr. Bever has resurfaced with Stalin's Dilemma, a game about Soviet economic development between 1928-42. He intends to make the round revision of the game (which was designed for classroom use) and offer it free to the gaming community. Here is what he wrote us:

"After a few twists and turns in my career, I'm now teaching European history at SUNY College at Old Westbury, and a couple years ago I got a modest grant from the NSF to create a computer simulation of Soviet economic development 1928-42. The basic goal of the game is to prepare the USSR to fend off the Nazis at less human cost than Nazi conquest is likely to involve. The sim is geared to classroom / homework use (ie, it's a pretty small and unadorned program/game compared to commercial computer strategy games (which is why I find them difficult to integrate into courses, much as I'd like to (which inspired me to make it))), but it was suggested to me that it might be of interest to people who get games from your site. Furthermore, part of my grant requirements are to distribute the game as widely as possible, and, finally, I'm about to do a round of revision to the game, and would like feedback from anyone interested in giving their reactions and/or suggestions. Therefore, I was wondering if you'd like to offer it as a free download from your site as a promotion and/or service to the gaming community."

As it stands, Stalin Dilemma is a very interesting and well-thought out simulation. True to its origins as a game designed for classroom use, the game is very short: you only have 5 turns to implement policies and see the results of your actions. But with dozens of variables to toggle, each of which affect multiple others, you will likely replay the game more than a few times to exploit this intricate web of inter-dependencies to minimize the number of lives lost in your cause. Stalin's Dilemma is a refreshing, unique, and realistic socio-political simulation on an important era that's not a common subject for PC games. Here's hoping that Dr. Bever will some day release an updated version for us to enjoy. In the meantime, make sure to send your comments to Dr. Bever at the e-mail address listed in the game. 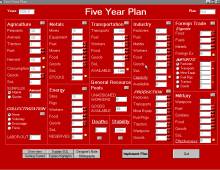