One of the earliest flight sims by MicroProse, Spitfire Ace was designed by Sid Meier for the Atari and converted to PC version by R. Donald Awalt. The game depicts aerial combat over Europe in World War II. Your goal: pilot the Royal Marine Spitfire and defend London during the Blitz. Despite hardware limitations at the time, Spitfire Ace managed to present a reasonably realistic flight model, with decent graphics and animations (although like most early flight sims, it is almost impossible to tell different types of planes apart). There are 15 different scenarios you can choose from, ranging from France, to Malta and D-Day. You are scored at the end of each mission, but the lack of career mode of any kind dampens the long-term play value. Overall, a solid early sim that is worth a try for fans of World War II simulation or Sid Meier himself, if only for some nostalgic moments that will soon pass. 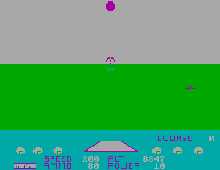